Layouts That Reveal The Advantages Of Having A Kitchen Peninsula

The island is probably the most common accent piece for a kitchen but it’s usually something that only large kitchens can accommodate. Islands go well with open floor plans so if you have the room then should definitely take advantage of it. However, the island is not the only option. A kitchen peninsula is an interesting and practical alternative for smaller spaces or for certain types of layouts.

Best Reasons for Incorporating a Peninsula in Your Kitchen

1. Attach the Peninsula to One Wall

A kitchen peninsula can sometimes prove to be a better option than an island. It provides circulation on three sides while one side is usually attached to a wall and this can offer some nice advantages.

2. Use the Kitchen Peninsula to Extend Existing Cabinetry

A peninsula can be an extension for your kitchen cabinetry or even for a kitchen island. It can be lower than the counter and it can be used as a comfortable dining table or a breakfast nook.

A peninsula is pretty similar to an island but since it’s attached on one side to a wall it doesn’t need a solid base, like this minimalistic kitchen design. It can look something like this, with just a solid top and a side panel for support.

4. Use the Kitchen Peninsula as a Prep Area

Peninsulas are more suitable for small kitchens. They can extend the counter space and offer additional storage space if needed. Other possibilities include using the peninsula as a bar or as a prep area.

In a way, a peninsula is just a table attached on one side to a wall or an existing piece of furniture. Peninsulas don’t necessarily include storage underneath their tops although that too can be an option.

6. Use a Kitchen Peninsula to Separate Space

You can use a peninsula to define the kitchen as a separate space in the case of an open floor plan or to visually separate the cooking space from the rest of the room.

7. A Kitchen Peninsula is Multi-Functional

This kitchen peninsula has an irregular form and includes shelving storage for boxes, jars, and other things. It can be used as a bar if desired but ultimately it remains a multifunctional feature.

8. A Kitchen Peninsula Can Contrast With the Color Scheme

A kitchen peninsula adds counter space but this doesn’t mean its top has to match the counters. In fact, it could be interesting to play with contrasts and various combinations of materials, textures, finishes, and colors.

9. Kitchen Peninsulas Can be Large or Small

Just like islands, peninsulas can have a variety of different designs, forms, and sizes, depending on the space available and the aesthetic preferences. A small peninsula such as this one can be a really great addition to a compact kitchen.

10. Build a Kitchen Peninsula Off of a Support Beam

If your kitchen has a large support beam or column and you don’t really know what to do with it, use it as a support for a peninsula. It can be small and you can use it as a breakfast table in the morning.

11. Close Off a Kitchen With a Peninsula

Use a peninsula to close off a kitchen from the rest of the open floor plan or to give it more privacy without separating it from other spaces using walls. Also, don’t forget the task lighting.

12. Experiment With the Shape of Your Kitchen Peninsula

Give your kitchen peninsula any shape and size you want. It should be customized to perfectly complement the kitchen so don’t make it too big, too small, too tall, or too narrow. It needs to be just right for the purposes you have in mind.

13. A Kitchen Peninsula Surface Can Have Two Levels

This kitchen peninsula is pretty interesting in the sense that it’s mostly white except for the side that faces the social area. Also, it has a raised bar surface which allows it to be multifunctional.

14. Continue a Countertop With a Kitchen Peninsula

Usually, the peninsula is added in the continuation of the kitchen counter to form either an L-shaped or a U-shaped layout. To make it look more like an island, attach it to a wall that has no cabinets or shelves attached to it.

15. Kitchen Peninsulas Can Be Combined With Islands

A peninsula is more space-efficient and sometimes even more practical than an island. They both have similar functions and their designs are quite alike in most cases. Of course, a customization is always a good option.

16. Make Your Kitchen Peninsula Into Seating

Most people choose the surround their kitchen peninsula with a variety of barstools, but if you don’t like high seating, there are other options for you! Just look at this kitchen in Decorpad, where the kitchen peninsula, which extends from the wall, was used to make booth style seating for the kitchen table. This is perfect for completing the farmhouse vibe in the room, as well as providing a nice comfy seat for dining.

17. Use Your Kitchen Peninsula as a Table 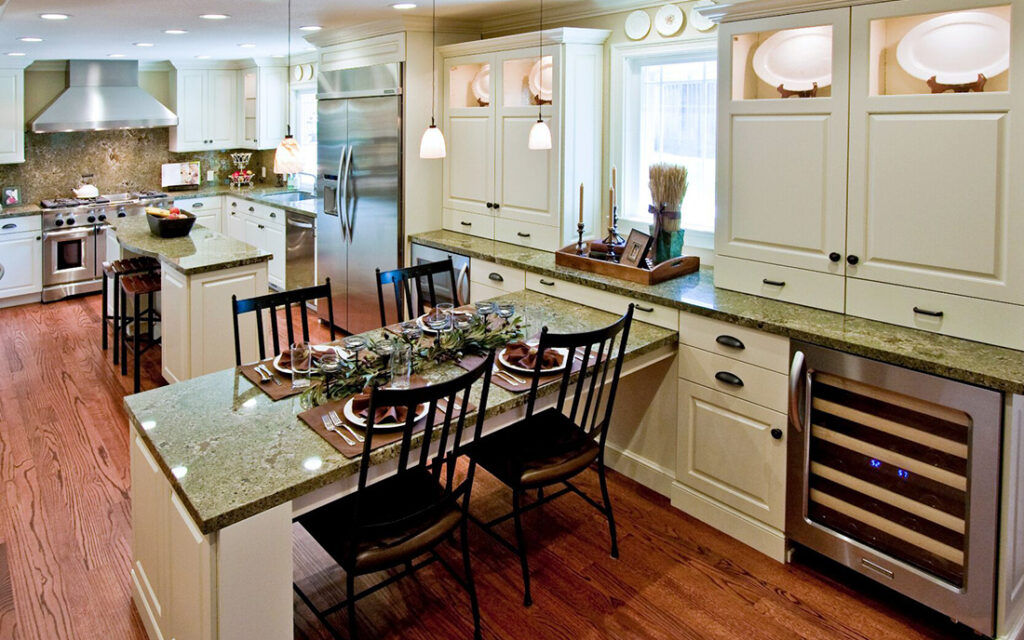 Unlike kitchen islands, kitchen peninsulas can generally come in any height you choose and you can build them anywhere you want. This means you don’t have to stick to the high-top style kitchen peninsula that most people go for. You can even decide to make your peninsula a built-in table for your kitchen! To get an idea of what this could look like, take a glance at this kitchen in Premier Kitchens, where the peninsula was not only installed in the middle of the cabinets but was also used as the dining room table.

18. Kitchen Peninsulas Can Work for Even the Smallest Spaces

Do you have an exceptionally small kitchen? Well not to worry, as a kitchen peninsula really can work for any space as they come in retractable varieties. Therefore you can install a retractable kitchen peninsula into your current counter top and pull it out whenever you need a little extra space. See this idea in action on Ideal Home, where a retractable peninsula was installed above a wine rack to use as an easy access wine bar whenever the homeowner needs it!

19. A Kitchen Peninsula Can Just be for Storage

Maybe you need more spaces to store things, but don’t need any more seating in your kitchen. A kitchen peninsula can help you here too. Although hybrids are more common, kitchen peninsulas that just feature storage are available and can be a welcome addition to your home. Look at this example in Decorar Y Mas, where the kitchen owner decided to add a peninsula of cabinets with glass doors so that they could display their beautiful collection of dishes.

20. Your Kitchen Peninsula Can House Your Pets

Think you don’t have room for a fish tank? Think again! Just as you can put whatever style of storage you want into a kitchen peninsula, so too can you have a built-in fish tank. Not only does this make it easier to interact with your fish on a daily basis (and remember to feed them) but it also can really spice up your kitchen décor. This idea came from If It’s Hip, It’s Here, where the fish tank was installed into the kitchen peninsula. And better yet, it has a convenient drawer above it which opens and closes, to allow for feeding the fish and cleaning the tank, while also keeping it fully enclosed so the scent doesn’t get into the kitchen.

Best Deals and Discounts on Refurbished Apple Products in 2021

Missing Fall at Home? 8 Ways to Spice Up Your Dorm

How To Build An Outdoor Hanging Daybed